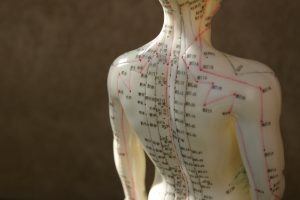 Acupuncture originated in China from where it has spread throughout the world. This art & science has been used for over 5000 years. Very fine pins are gently inserted into specific points on the body to stimulate the body’s response. Acupuncture does need to be a painful experience, and often leads to a deeply relaxed state. Points can also be treated by gently heating them with the herb moxa, pressing or massaging, and laser can be used instead of pins for the very young or sensitive.

Acupuncture literally means “to treat with needles” and over the last few thousand years a number of styles of acupuncture treatment have developed. These different styles reflect both cultural and research influences as acupuncture has spread throughout the world: initially to Japan and Korea in the 6th century; to Vietnam by the 8th century; eventually to Europe via France in the 1500’s; then finally the whole world by the early 21st century. Rather than one style or system being necessarily better than another, a qualified acupuncturist will choose the best option for the individual client before them, having regard to the clients presenting complaint and constitution.

It is common for patients to be so relaxed with treatment that they fall asleep. In practice Acupuncture is often be integrated with other associated therapy related in a multi-modality form of treatment. Three Chinese medicine practitioners practice acupuncture at the clinic.

It is usual to complete a 4 year full time degree program majoring in Acupuncture to be registered as an acupuncturist in Australia. Acupuncturists are regulated by the Chinese Medicine Board of Australia along with 13 other Health professions through the Australian Health Practitioner Regulation Agency (AHPRA).

One of the most recently developed styles of acupuncture is auricular (ear) acupuncture, which was popularized by the French in the 1960’s and is now used worldwide for a range of conditions.

Auricular acupuncture points are treated either with small fine acupuncture pins, or by taping a small tack or metal sphere to the point to allow the client to re-stimulate the points by simply pressing on them between visits.  Laser can be used as an alternative to needles for sensitive clients. What makes ear points special is that the nerve supply to the fleshy part of the ear is mainly via cranial nerves. This means that when an ear point is stimulated a centre directly within the brain is often stimulated.

Most recently the US military is using a specific group of ear points for the treatment of acute pain and trauma on the battlefield – called “battlefield acupuncture”.  This link takes you to an interview with Dr. Richard Petri, a Colonel in the US Army, discussing the role of acupuncture for pain and the battlefield. http://www.kfoxtv.com/news/features/top-stories/stories/more-soldiers-turn-acupuncture-reduce-painkiller-intake-4807.shtml#.U6J9vfmSxuK. Auricular acupuncture has broad application, so when you next visit you’ll understand why you may have points selected on your ear.

Trigger points  are associated with myofascial pain and dysfunction, and have been described since ancient times (652 CE) as one type of acupuncture point.  In the Chinese medical model trigger points represent sites of qi & blood stagnation and can develop following a range of stimuli including postural strain, trauma or radiculopathy. Often active trigger points are left over from previous injuries which have not completely resolved. These points are relevant in  some types of headache, TMJ problems, shoulder and elbow pain, low back pain, shin splints and pain associated with many other musculoskeltal conditions.

Treatment differs from acupuncture for constitutional conditions as it is often desirable to create a muscle twitch and ache when needling a trigger point. In contrast constitutional acupuncture does not result in a muscle twitch, and depending on the method used can be completely painless. Treating trigger points effectively can lead to a rapid change in the symptom picture, allowing continued focus to any residual underlying conditions.

Why a new name for an ancient technique? Since the registration of acupuncture in Australia in 2012 it has been illegal to use the title ‘acupuncturist’ unless registered or endorsed by an Australian Health Practitioner Regulation Agency (AHPRA) board as an acupuncturist. The term ‘dry needling’ has been adopted by people who practice trigger point acupuncture but are not qualified as acupuncturists. Dry-needling is usually taught in short courses (often as little as 1 weekend).

If you have seen practitioner who practices “dry needling” please understand that this is not a reflection of an acupuncture treatment from a qualified acupuncturist.

Acupuncture point injection therapy may be offered as an alternative to regular acupuncture depending on the clients particular circumstances. It is usually offered for symptoms associated with some musckuloskeltal conditions.

Most people, especially those who are apprehensive about injections are surprised how easy and quickly these injections can be given. In fact, saline injections generally should not be compared with many injections given in conventional medicine. The needles used are very fine and are more like acupuncture needles. The injections are typically painless or only mildly uncomfortable.

The health benefits of light are not a new idea and the discovery of laser light in the 20th century has allowed new ways to use light to influence the body. Unlike sunlight which contains the full spectrum of colours, laser light produces a single frequency or ‘colour of light’ which can be focused into a narrow beam. This means that a very specific dose and type of energy can be delivered to a very specific part of the body. While a high energy laser can be used to cut tissue in surgery (a ‘laser scalpel’), low level laser therapy (LLLT) uses a low powered laser (usually red or infrared) to stimulate healing. Research has shown LLLT to stimulate cellular metabolism resulting in a range of effects such as improving circulation, reducing swelling and inflammation, relieving pain and reducing inflammation.

LLLT can be used on its own or in conjunction with other therapy such as Acupuncture. The biostimulatory effect of laser means it can be used to stimulate acupuncture points instead of needles, which offers another approach to using acupuncture in sensitive people and young children. LLLT can be combined with regular acupuncture with needles in the same treatment, with the laser targeting points which may be to uncomfortable or unsuitable to needle due to pain, swelling or inflammation.

While acupuncture pins are suitable and often tolerated by children, laser overcomes the challenge of a young child staying still.  In clinic we often use laser with children, and find they frequently ask if they can try pins as well! The development of laser technology has also helped to advance acupuncture research. Because it is impossible for the patient to know if the laser is turned on or off (as nothing is felt), it has been used in several trials demonstrating the effect of acupuncture points.

The advances and availability of laser technology has many benefits on its own but when combined with the ancient understanding of acupuncture points, it also provides another useful therapy.